To qualify for the ECBC Seal of Approval, a brewer must meet the following standards in seven areas:

Repeated studies have shown that prolonged brewing time adversely affects cup flavour. Because brewing time relates directly to coffee grind, or particle size, equipment designs may be modified to give shorter – or, in some cases, longer – water contact times. The water contact time, however, should never exceed 8 minutes.

In testing brewing devices, ECBC will use the grind appropriate to the coffee-to-water contact time. Generally speaking, this will be

Grind classification will be determined using the air sieve measure method. Either the method of heating or delivering the water usually determines the brewing time. In some equipment designs, both of these factors control time. In brewing devices that provide for preparing varying quantities, the time for brewing either the minimum or maximum quantity should remain with in the range of the designated grind; the consumer shouldn’t need to buy a variety of grinds in order to prepare different quantities of brew. In this situation, the test will evaluate brewing times at full capacity and at two-thirds capacity. Whenever possible, the actual brewing times will be determined from time-temperature recorder charts.

A coffee brewer will meet the temperature requirements if, during normal operation, the temperature in the brew basket reaches 92ºC within the first minute of the brew, and stays between 92- 96ºC throughout the brew cycle. The temperature should never exceed 96ºC.

Measurement of brewing temperatures will be made by using an RTD (Resistive Temperature Device). The sensors will be placed in the brewers to produce a correct and useful picture of the temperature and the changes in the temperature throughout the brewing process. The water contact temperature is measured in the centre of the filter unit on the surface of the coffee. This condition applies to brewers used both at partial and at full capacity. 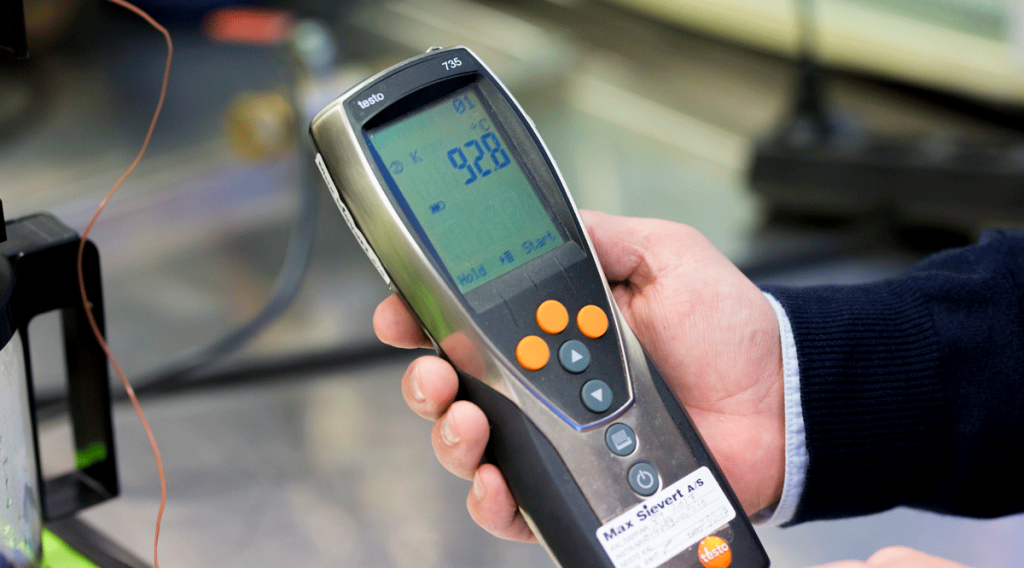 Under the conditions set up for ECBC’s equipment evaluation, the solubles concentration (strength) of the beverage may range from 1.30% to 1.55%. Any value greater or less than these indicates that the equipment isn’t performing satisfactorily or that the brewing technique isn’t acceptable.

The value for the solubles concentration will be plotted on the Coffee Brewing Control Chart and extended to the diagonal line that represents the coffee-to-water ratio of 50-60 grams per litre.

The solubles yield (extraction) – how much coffee flavouring material has been removed from the bed of coffee grounds – can then be ascertained. The solubles yield may range between 18.0% to 22.0%. Any value lower or higher than these indicates that the equipment isn’t performing satisfactorily and isn’t acceptable.

To determine how uniformly the coffee beverage can be prepared in the equipment, the evaluator will prepare 10 separate batches of the beverage. Samples of each batch will be analysed for solubles concentration using the coffee refractometer and extraction calculated using the Coffee Brewing Control Chart.

The requirements for a beverage strength (solubles concentration) is between 1.30% to 1.55%, resulting from an extraction (solubles yield) of between 18,0% to 22,0%. This being determined by a coffee refractometer and the Coffee Brewing Control Chart.

The requirement is that an even and homogeneous extraction be achieved from the entire bed of coffee.

For coffee brewers all of the coffee in the brew basket must be moistened during the first minute of the contact time.

For fresh brew vending machines all the coffee should be moistened within the first seconds.

In some brewing devices, water may not be applied uniformly to the grounds or the coffee and water may not mix completely. Non-uniformity of extraction points to design or functional defects in a brewer. It clearly indicates that the distinct phases of wetting and extraction aren’t proceeding in a uniform manner. Non-uniformity of extraction results in mixing grassy under-developed tastes with astringent and bitter over-extracted tastes, resulting in a less flavourful coffee beverage.

Aside from visual observation, the only way of assessing uniformity of grounds extraction is to sample the bed of grounds after the brewing cycle has concluded and to measure the residual soluble material.

The rating number is calculated by comparing residual soluble solids in the outside, middle, and inside areas of the wet coffee grounds in the brew basket. The result is multiplied by 100 to convert the percentage to a whole number.
The Index Rating is 0 – 100, with 100 indicating perfect uniformity of extraction. An average uniformity rating number of 60 would be considered “good,” a rating number above 75 would be considered “excellent,” and a rating number above 90 would be “outstanding.” All ratings below 60 would be listed as “needs improvement” and could result in the brewer not being certified by the SCAA/ECBC.

Good coffee beverages require careful measurement of both coffee grounds and water. The brew basket and beverage receiver must be large enough to accommodate the desired coffee-to-water ratio. In evaluating this aspect of equipment design, ECBC applies the following rules:

Excessive sediment in the brewed coffee should be avoided. The amount of sediment present will be measured in the following way: 100 millilitres is poured through a filter paper of known weight, which is dried and weighed again. The increase in the weight of the paper is the weight of the sediment. No equipment that produces sediment of more than 75 milligrams per 100 millilitres of brewed coffee will be accepted.

The receptacle container, which holds the coffee after brewing, must hold the quantity of coffee for which the brewing equipment is designed at full capacity. There must be a minimum of 0.5 cm clearance or headspace from the maximum level of the brewed coffee in the vessel up to the bottom of the brew basket.

ECBC will carefully examine all written and printed instructional and promotional material supplied with the equipment. The stated range of capacities for proper brewing should coincide with ECBC test ranges. The ECBC will correct any errors, propose the removal of any confusing information and provide the correct information to the manufacturer.

Adhering to precise brewing standards that are universally understood offers numerous benefits. First and foremost, the standards will lead to a higher level of consumer satisfaction. The more nearly perfect beverages that are available for consumption whenever coffee is prepared, the more coffee will be sold. In turn, the more equipment will be needed and the more reasonable and rewarding use of accessory features will prevail. In addition, standards form a firm foundation for successful advertising and promotion efforts.